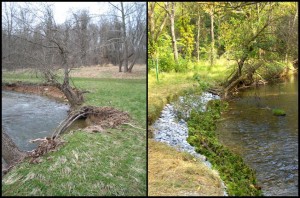 We are committed to protecting and preserving Valley Creek and West Valley Creek. Want to help? Please contact: Pete Goodman: 610-827-7619  Or CLICK HERE to fill out a volunteer form.

1980: Began working to improve stormwater management practices associated with the construction of the Exton bypass.

1981 – 1995: Together the Valley Creek Coalition, sued for a closure and cleanup of the Knickerbocker landfill. This stopped illegal hazardous waste dumping in the Knickerbocker landfill on Valley Creek, prevented a hazardous waste treatment plant on the site and eventually obtained DER oversite of the landfill closure. The landfill was closed in 1981. It wasn’t until 1991 that the hole was filled, a leachate collection and treatment system was in place, monitoring wells were dug, earth – clay cover in place, and vents in place, that the landfill was officially closed. In October 1995, a consent decree ended the 16 year legal battle. The impact of groundwater pollution on Valley Creek will be with us for decades to come.

1982 – 1985: Applied to the DER (now DEP) to get West Valley Creek upgraded from Trout Stocking Fishery to Coldwater Fishery designation, finally achieved after 3 years of effort.

1983 – 1993: In response to the proposed Warner Quarry 113 acre expansion, together with the Valley Creek Coalition, VFTU participated in preparation and subsequent appeal of the DER permit in 1988. Our chief concern was warm water discharge laden with silt, but dewatering of wells and springs was also an issue.   In 1986, the quarry was pumping 3 to 5 million gallons per day into Valley Creek which was already having adverse effects. Had the expansion and deepening of the pit been completed, it was estimated that 11 million gallons per day would have entered the stream. Quarry operations ceased in 2000.

1985: Pursued legal remedies over the release of PCB’s from the Paoli Rail Yards into the Valley Creek watershed by suing SEPTA, Conrail and Amtrak in federal court.

1985: Began working to ensure environmentally responsible development for the West Lakes project, including relocation of a section of Crabby Creek. At our 1987 Trout Show, 337 attendees saw the Trammel Crow Company and Roy F. Weston Company presented with an award recognizing their significant contributions to the preservation of an environmentally sensitive area of Crabby Creek.

1988 – 1998: Prevented development projects on the Church Farm property by Willard Rouse which would have placed a package sewage plant discharging effluent into the headwaters of Valley Creek and West Valley Creek.

1988: Installed baffles in culverts for several road crossings of Crabby Creek. The wild trout population runs about one fish per linear foot of stream. These culverts had about zero holding water, and comprised a total of about 450 feet of stream length, i.e., habitat for about as many wild trout. Baffles which cross about 80% of the culvert width were installed about 8 feet apart alternating from side to side. Designed by Joe Armstrong, the baffling system consists of 4 x 4 wood beams anchored to the bottom of the culverts by bolts installed in holes drilled in the cement. This backed the water up sufficiently to hold juvenile fish, and allow easy passage for adults.

1996: Worked to improve stormwater management for the expansion of Exton Mall.

1990: DER declares Broad Run in West Bradford Township as an Exceptional Value stream through the efforts of Joe Armstrong.

1990 – 1995: After 5 years of negotiations with PennDOT over the widening of Route 202 and the resulting impacts of stormwater runoff, sued PennDOT and the DEP. The suit was settled when PennDOT proposed a settlement offer a week before trial, which was accepted by the Valley Creek Coalition.

October 6, 1993: the PA Environmental Quality Board up-graded Valley Creek’s designation to an Exceptional Value stream, principally through the efforts of Joe Armstrong.

1994 – 2009: Established conservation easements and covenants of restriction along portions of Valley Creek and West Valley Creek.

1994: During the Worthington Steel (formerly National Rolling Mills) hearing on their application for stormwater discharges, presented documentation that something was amiss with Little Valley Creek in that vicinity. A fine from USEPA for $300,000 for mishandling hazardous substances was also pointed out as raising serious questions about the facility and its impact on the stream.

1996 – 2008: The Pennsylvania Turnpike slip ramps at Route 29 was first locally publicly proposed in 1996. VFTU was paying attention to this development as it would add considerable impervious surface into the Valley Creek watershed. We reviewed many versions of plans and attended many meetings fighting to get better stormwater runoff management. At the last meeting at DEP where we were told DEP was going to issue the NPDES permit, a small basin was removed from the plans when VFTU pointed out that the PTC’s test borings showed limestone pinnacles less than 18 inches below the design bottom of the basin. Despite years of effort and significant expense for consulting, two major infiltration basins at the slip ramps site failed to perform as designed shortly after completion.

2000: Formed and continue to participate in the Valley Creek Restoration Partnership.

2001: Sued the DEP contesting the issuance of a permit for development on the Vanguard expansion site to prevent excess stormwater runoff, with the result that DEP was ordered to enforce the rules properly from the perspective of overall impact on the watershed, resulting in the Valley Creek Settlement Agreement.

2003 – 2006: Began working to ensure cold water discharge from the Atwater (formerly Warner) quarry site into Cedar Hollow Run, a tributary of Valley Creek. The Atwater developers were convinced to install a system to withdraw cold water from below the thermocline and discharge it into Cedar Hollow run. The landowners association also entered into a perpetual maintenance agreement for cold water discharge with DEP as part of their Chapter 102 permitting. The maintenance agreement was last enforced in March 2015 when a blockage restricting the flow was removed.

2005 – 2019: After years of negotiations VFTU and the National Parks Conservation Association appealed the NPDES permit for the Pennsylvania Turnpike widening project (Mile Post 320 – Mile Post 326) in Tredyffrin Township. A Settlement Agreement reached in 2019 through intense technical negotiations on stormwater engineering issues ended litigation. Pete Goodman and Frank Donohoe were chiefly responsible for this effort. Partnered with the National Parks Conservation Association, they formed a team with Michele Adams of Meliora Design, Clay Emerson of Princeton Hydro and John Wilmer as legal counsel.

2008: As a part of the Valley Creek Restoration Partnership, the Chester County Conservation District lead a project funded by the William Penn Foundation to relocate a portion of Crabby Creek to prevent an exposed sewer main from breaking and prevent future sewer line impacts in the area.

2014: Having failed to convince Tredyffrin Township to develop a meaningful emergency response plan for sewer main breaks, VFTU starts to push the township for (and completion of) the relining of the force main sewer line from the pumping station in Chesterbrook to the Valley Forge Sewer plant. The project was completed in 2016.

June 2018: Found the basin on the east end of Atwater, below the Echo Valley buildings, leaking muddy water underground to Cedar Hollow Run. Met with the Atwater developers and Chester County Conservation District engineer. The basin was rebuilt and lined with non-porous clay. It is still functioning properly as of August 2020.

2018: Four infiltration trenches with a total capacity of over 100,000 gallons of water were installed in Crabby Creek watershed residential neighborhoods. VFTU was involved in all 4 projects, obtaining grants totaling $327,498 and administering 3 of the installations, which were overseen by Tredyffrin Township and installed by Reamstown, Inc.